Airport recognized for excellence in training 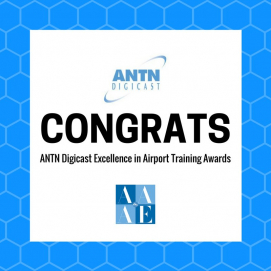 An ANTN Digicast Excellence in Airport Training award signifies that airport employees and others working at each facility have completed a specified amount of federally mandated airport-specific and continuing education training using ANTN Digicast’s web-based training system. AAAE recognized 129 airports with the award.

“Continuous training is a priority at Daytona Beach International Airport,” said Deputy Director Karen Feaster. “Much of the credit of this award goes to Training Coordinator Tara Kissling, who has championed training and the use of ANTN Digicast videos at our airport.”

Within a week in February, DAB staff responded to two separate emergency landings. On Feb. 20, a private aircraft with two occupants landed on its belly without landing gear. Aircraft Rescue and Fire Fighting (ARFF) crews responded quickly to put out the resulting fire and get the occupants to safety. As a result of this incident, both runways were closed for several hours while airport staff worked to remove the plane and remediate the fuel spill. On Feb. 26, staff responded to an emergency landing of a commercial plane, a United Airlines Airbus 320, due to a fire in the cabin. A battery charger caught fire during flight. The fire was contained to the passenger's bag, put in fire retardant case until the plane landed safely. Again, the ARFF crew and other airport staff responded quickly to remove the chargers from the plane and assist the flight crew with any needs before the plane took off about an hour later.

“That is why continuous training is so important because you never know when or what type of emergency can happen at an airport,” said Feaster. “In addition to training videos, our staff conducts a number of training exercises each year not only with airport staff, but our community partners that play a role in emergency response.”

“Digicast was created for airports as a cost-effective, efficient way to help them comply with training requirements,” said Patrick Raker, senior vice president of AAAE’s training and technology services department.

Airports that subscribe to ANTN Digicast have unlimited access to the service’s 300-plus training programs for all employees and tenants. Topics covered include operations, Aircraft Rescue and Fire Fighting (ARFF), security, customer service, FAA-required recurrent training and much more. ANTN Digicast training is designed for airport employees, as well as tenants, such as airline workers and subcontractors who work at an airport.